I am an art historian working primarily on medieval parish church architecture. I completed my doctorate on sedilia in medieval England in 2015 at The Courtauld Institute of Art.

In chronological terms, the exhibition opens in 1650 during Velázquez’s second period in Rome, at which date he had already spent more than a year outside Spain. In Rome, the artist painted around a dozen portraits of individuals associated with the papal court, of which four of the surviving six are included in the exhibition.

They constitute a separate chapter within the artist’s oeuvre and one in which he markedly extended his expressive registers in order to brilliantly convey the personalities and concerns of these sitters.

The exhibition opens with the Portrait of Innocent X from Apsley House, London. A version of the celebrated portrait in the Doria Pamphilj Gallery, Velázquez brought it back with him to Madrid. It will now be exhibited in Spain for the first time.

Also on display in this gallery are the portraits of Cardinal Camillo Massimo (The Bankes Collection, National Trust, UK), Cardinal Camillo Astalli Pamphilj (Hispanic Society of America, New York), and Ferdinando Brandani (Museo del Prado), chief clerk to the papal secretariat, the latter a new identification of a work previously known as “the Pope’s Barber”.

While Velázquez was in Rome, Mariana of Austria had married Philip IV and the city welcomed the arrival of the new Queen in late 1649. The second section in the exhibition focuses on the artist’s return to the capital in 1651 after much insisting on the King’s part. It presents comparisons between some of the Roman portraits and those Velázquez executed for the court after his return. Philip IV (Museo del Prado), The Infanta María Teresa (Metropolitan Museum of Art, New York) and Queen Mariana of Austria (Museo del Prado) reveal how the painter once again deployed the hieratic distance evident in his earlier royal portraits as opposed to the expressivity of the Roman period.

This return to the court constitutes the core of the exhibition, comprising the royal portraits that Velázquez produced from his arrival in Madrid until his death in 1660. Together they form a separate chapter in his career due to their technical and iconographic uniqueness and exceptionally high quality. 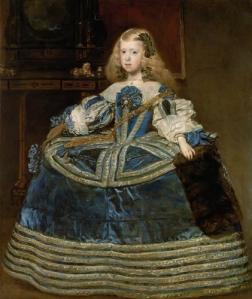 The Infanta Margarita in blue and gold

At this period the world of women and children makes its appearance in the artist’s work and is the subject of the third room, which includes The Infanta María Teresa, Prince Felipe Próspero and The Infanta Margarita in blue and gold, all loaned from the Kunsthistorisches Museum in Vienna. During this period Velázquez’s colour became denser and more rich and varied, while the compositions included spatial references arising from the settings. Particularly outstanding within this group is Las Meninas, which will not be hung in the exhibition (remaining in its habitual location in the Museum) but which is a key element in this group given that it represents a remarkable defence of the genre of portrait painting. Its complexity makes its comparable to the most erudite type of “history painting” and it can be seen as the finest example of the level of sophistication achieved by the Spanish court at a high point of cultural creativity. In addition, Las Meninas also represents a profound exercise of social and professional affirmation on Velázquez’s part through the inclusion of his self-portrait.

The demand for images following the new Queen’s arrival and the birth of infants and princes meant that Velázquez was obliged to produce more portraits, to which he responded by setting up an active studio that is represented in this exhibition by various studio versions of originals by the artist, created under his supervision. They include The Infanta Margarita and Queen Mariana of Austria (both Musée du Louvre, Paris). The exhibition concludes with examples of court portraiture by Velázquez’s successors Martínez del Mazo and Carreño. Both artists looked to their predecessor’s solutions in order to move royal iconography towards a more complex, Baroque style and to create a particularly Spanish typology for the court portrait that differs from other European schools in its inclusion of particular rooms in the royal palaces as the settings for these works.

The accompanying catalogue –Spanish and English editions – includes three essays: the principal one by the exhibition’s curator Javier Portús; another on painting at the Spanish court after the death of Velázquez by Miguel Morán Turina of the Universidad Complutense, Madrid; and a third that analyses aspects of the court in Vienna by Andrea Sommer-Mathis of the Austrian Academy of Sciences.