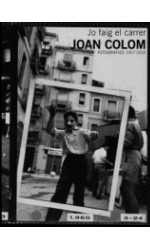 Joan Colom: Photographs 1957-2012, Museu Nacional d’Art Catalunya, Barcelona, 12 December 2013 – 25 May 2014. Major retrospective of this Barcelona-born photographer (b.1921), who revolutionised Spanish photo-reportage with his work in Barcelona especially his series focussing on its run-down barrios and red-light districts of the late 1950s and 1960s. Selected from the archive of more than 9,000 photographic prints and negatives recently given to the MNAC.