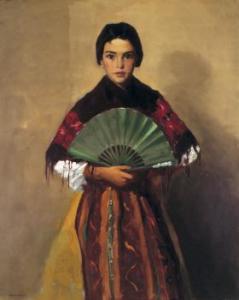 Spanish Sojourns: Robert Henri (1865-1929) and the Spirit of Spain, San Diego Museum of Art, California, 29 March – 9 September 2014; and touring to Mississippi Museum of Art, Jackson, 2014-2015.
The first exhibition devoted to the Spanish paintings by Henri, one of America’s ‘Ashcan School’ of artists, who travelled around Spain seven times between 1900 and 1926. Exhibition of 40 paintings, mainly portraits ranging from celebrated bullfighters and dancers to gipsy women and peasants.
The exhibition is accompanied by a catalogue in hardback, which presents new scholarship on Henri and places his Spanish work in the context of other American artists, architects and writers inspired by Spain at the beginning of the early twentieth century.