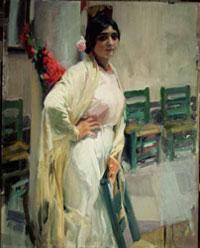 Fiesta y Color: The ethnographic gaze of Sorolla, Museo Sorolla, Madrid, 10 December 2013 – 20 May 2014.
Focuses on Sorolla’s images of the rural costume and customs that he saw on his travels over eight years through Andalucía, Aragón, Castilla, Cataluña, Extremadura, Galicia, Guipúzcoa and Valencia between 1911 and 1919.
Exhibition includes costume, jewellery, photographs and letters as well as some 25 paintings and drawings, several of which have never been shown in public before and some of which were acquired by Sorolla on his travels. His collection of regional costume is important as it was acquired before the big exhibition of Regional Dress held in Madrid in 1925, which stimulated collectors’ interest in such material.