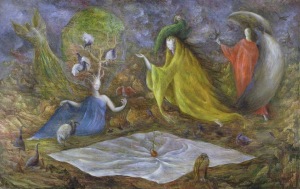 Exhibition:
Leonora Carrington, Tate Liverpool, 6 March – 31 May 2015.
Exhibition put on as part of the 2015 Year of Mexico in Britain celebrations. Tate Liverpool has organised the first monographic exhibition in the UK devoted solely to the Lancashire-born but Mexican-based surrealist Leonora Carrington (1917-2011). A selection of key paintings made throughout her career explore how she devised her own distinctive take on surrealism whilst working alongside other artists such as Salvador Dalí. Also displayed alongside her paintings are examples of her poetry, sculpture, textiles and tapestries as well as designs for film and theatrical performances that she created after she had settled in Mexico in 1941. The exhibition is not, however, accompanied by a catalogue though there is a planned Study Day scheduled for Saturday 23 May, 10.30-16.30.

Carlos Cruz-Diez (b.1923), Liverpool, 12 June 2014 – Winter 2015.
The artist has been commissioned by the Liverpool Biennial of Contemporary Art and Tate Liverpool to commemorate the centenary of the beginning of World War I by creating his contemporary version of a World War I ‘dazzle-ship’ in Liverpool’s Albert Dock, adjoining the river Mersey. A dazzle-ship’s abstract geometric-form of camouflage was devised in 1917 (and applied by the English artist Edward Wadsworth) to distort optically a ship’s shape, so that it was difficult for German submarines to calculate the course it was travelling on, and so know from what angle to attack. But so far the Venezuelan artist’s ‘take’ on a dazzle-ship has been met by Scouse wits comparing it to a tube of Refreshers, the 1970s British sweet!