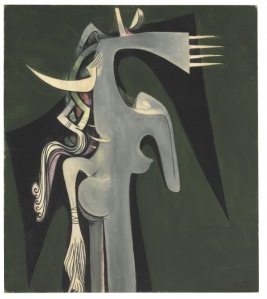 Surrealist painter born in Sagua la Grande, Cuba, of a Chinese father and a mother of mixed African, Indian and European origin. Studied at the Academy of San Alejandro in Havana 1920-3, then went in 1924 to Madrid where he worked in the studio of Fernando Alvarez de Sotomayor, the Director of the Prado, and also in the evenings at the Free Academy. Left Spain in 1938 after taking part in the defence of Madrid, and moved to Paris. First one-man exhibition in Paris at the Galerie Pierre Loeb 1939. Friendship with Picasso, who enthusiastically encouraged him, and with Breton and the Surrealists. Became interested in African sculpture. Fled in 1941 to Martinique with Breton, Masson and Lévi-Strauss, then returned to Cuba where his work was influenced by savage rituals and the tropical jungle. Visited Haiti in 1945 and 1946 and discovered the Voodoo cult; later in 1946 met Gorky and Duchamp in New York and returned to Paris. 1947-52 in Cuba, New York and Paris; left Cuba in 1952 to live in Paris. Since 1960 has also worked regularly at Albisola Marina, Italy. Awarded the Guggenheim and Marzotto Prizes 1964-5. Lives in Paris and Albisola Marina.

Published in:
Ronald Alley, Catalogue of the Tate Gallery’s Collection of Modern Art other than Works by British Artists, Tate Gallery and Sotheby Parke-Bernet, London 1981, pp.404-5