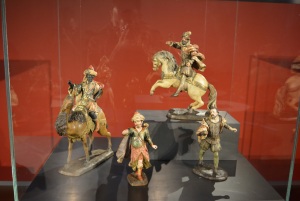 Now on display at the Museo Nacional de Escultura in Valladolid the museum’s newly acquired group of 19 individual polychrome sculptures by the Seville-born Luisa Roldán (1652-1706), forming the unusual subject of the Cavalcade of the Kings. These small-scale cedar-wood painted and gilded figures were acquired in December 2017 after being export-stopped and are the first examples of La Roldana’s work to enter the Valladolid museum. Amongst the mixed-race cavalcade, which is presumed to have formed the cortege for a much larger, but now dismantled, group, there is a fourth king, the King of Tharsis, the mythical Hispanic region cited in the Bible. The group is believed to have been carved before the sculptress moved to the Madrid court in 1689. A video clip showing some of the figures can be viewed here.