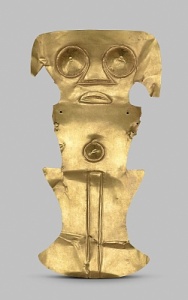 The Art Newspaper reports that a gold breast-plate presented by the Panamanian president General José Remón Cantera to Queen Elizabeth in 1953 is now on display at Buckingham Palace.

Long kept in storage as a piece of secondary importance, the breastplate was re-discovered by Royal Collection curator Sally Goodsir. Now exhibited in the Royal Gifts  Summer Exhibition at Buckingham Palace (until 1 October), the breastplate is dated to the 13th century in the exhibition catalogue.
However, the object may be much older: according to Kate Jarvis, a British Museum curator of the Americas, it is an example of tumbaga work, a term for an alloy of gold and copper that was used in Pre-Columbian central America, dating to as early as AD 700. Her opinion is shared by Warwick Bray, a professor emeritus at University College London, who dates the piece to AD 700-1000 and considers it a very large pendant to be hung on a necklace rather than a breastplate.

The future of the object after the end of the Summer Exhibition is still under discussion.