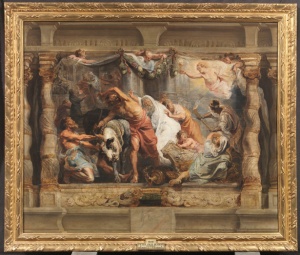 Rubens: The Triumph of the Eucharist, 25 March – 29 June 2014, Prado; and travelling to the Getty, Los Angeles in 14 October 2014 – 4 January 2015.
Display of six recently conserved panel paintings which Rubens painted as modelli for The Triumph of the Eucharist part of the series of 20 tapestries commissioned by Philip III’s sister the Infanta Clara Eugenia in 1625 to decorate the convent of Las Descalzas Reales in Madrid, to which the Infanta intended to retire. Four of the tapestries will also form part of the exhibition to illustrate the artistic process from Rubens’ initial painted designs to the finished tapestries woven in 1628 by the Geubels’ family workshop. Other tapestries from the series will remain on display in the convent, which is also open to the public as part of the Patrimonio Nacional.