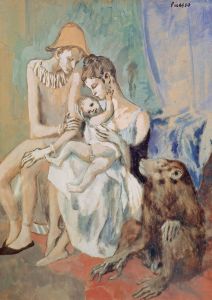 In 2019, as an exceptional cultural highlight, the Fondation Beyeler is mounting a unique exhibition devoted to Pablo Picasso’s masterpieces of his early Blue and Rose periods. This will be the most comprehensive presentation ever seen in Europe of Picasso’s paintings and sculptures from 1901 to 1906, each one of which is a milestone on the road to recognition as the twentieth century’s paramount artist. Picasso’s pictures from this period are counted among the most beautiful examples of modern art and are certainly some of the most valuable art works anywhere in the world.

At the age of just twenty, the aspiring genius Picasso (1881 – 1973) was already engaged in a restless search for new themes and forms of expression, which he immediately brought to perfection. One artistic revolution followed another, in a rapid succession of changing styles and visual worlds. The forthcoming exhibition at the Fondation Beyeler places the focus on the Blue and Rose periods, and thus on a central phase in Picasso’s work. It also sheds fresh light on the emergence, from 1907 onward, of Cubism, as an epochal new movement that was nevertheless rooted in the art of the preceding period.

In these poignant and magical works, realized in Spain and France, Picasso – the artist of the century – creates images that have a universal evocative power. Matters of existential significance, such as life, love, sexuality, fate, and death, find their embodiment in the delicate beauty of young women and men, but also in depictions of children and old people who carry within them happiness and joy, accompanied by sadness.

The exhibition features around 75 masterpieces on loan from major museums and private collections worldwide. In a multimedia space, fascinating and interactive books and a film allow visitors to immerse themselves in the young artist’s life and work.