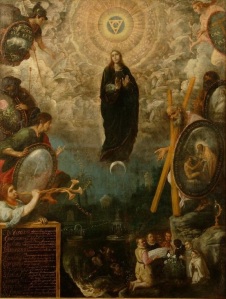 The exhibition Intacta María. Política y religiosidad en la España barroca, opening on 30 November  2017, analyses the process through which devotion to the Immaculate conception was created and popularised in early modern Spain. While the Immaculate Conception only became dogma in 1854, as early as 1616 the Spanish Monarchy became a staunch supporter of the theory, turning its defence into a national priority. In the following years, the Immaculate Conception became Spain’s most heartfelt devotion and a sign of national identity. Art played an important role in this process, amounting to what we may describe as a marketing campaign. This will be the focus of the Museo de Bellas Artes’ forthcoming exhibition, featuring more than 50 paintings, sculptures, prints and books borrowed from notable Spanish museums and churches such as the Museo Nacional de Escultura de Valladolid, the Cathedral of Seville, the Biblioteca Nacional de España, and many others.

Please click here for more information on the exhibition.