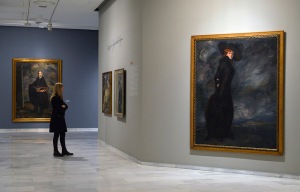 This exhibition features some 66 paintings by the Basque artist, several of which are displayed in public for the first time. Ranging in date from 1888, when Zuloaga was 18, to 1945, the works trace the artist’s development from his training in Paris to the mature work inspired by Spanish artists such as Velázquez, Ribera, Zurbarán, Goya and El Greco. The curators, Sofía Barrón y Carlos Alonso, focus on Zuloaga as both a landscapist and a portraitist. They showcase his representations of turn-of-the-century aristocracy, bourgeoisie and intellectuals, as well as his intimate portraits of family members. The exhibition is accompanied by a catalogue and is organised in collaboration with the Museo Zuloaga in Pedraza (Segovia) and its president, the artist’s granddaughter, María Rosa Suárez Zuloaga. 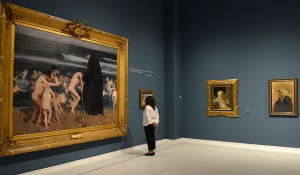 Sorolla and Spirituality (until 2 September 2018)

This exhibition features the work Yo soy el pan de la vida, exhibited to the public for the first time since its recent restoration, the result of a collaboration with the owners of the work, the Lladró family. Curated by Felipe Garín, the exhibition explores the religious themes which the Valencian artist explored briefly in the earlier part of his career. It comprises six works produced between 1883 y 1899, including ¡Triste herencia!, Monja en oración, Santa Clotilde, Mesa petitoria, and La Virgen María, all on loan from major public collections.