On Tuesday, The National Gallery officially announced the acquisition of The Drunkard, Zarauz (1910) by the Spanish master Joaquín Sorolla (1863-1923). A year ago, the gallery featured the artist in the monographic exhibition Sorolla: Spanish Master of Light which was splendidly inaugurated with royal presence. The last exhibition on the artist in the United Kingdom took place at London’s Grafton Galleries in 1908 and was coordinated by the artist. Also, very few British Museums own paintings by Sorolla and these are not usually on display. This acquisition thus marks an important milestone by promoting him as one of Spain’s most renowned artists.

Known for his sunny beach scenes, this painting represents an unfamiliar period of his career anticipating the painting cycle of the regions of Spain commissioned for the Hispanic Society of America in New York (painted between 1911 and 1919). It also relates to his early career during which darker scenes of social subjects predominate. Set in the coastal town of Zarauz (Gipuzkoa), Sorolla was on a holiday with his family and, due to the bad weather, was constrained to indoor scenes including the local taverns. He was especially fascinated by the man facing him frontally, called Moscorra, who he represented on another occasion in a more pronounced inebriated state (Museo Sorolla, Madrid). Moscorra slumps forward with bloodshot eyes while another drunkard pushes another drink towards him. Sorolla masterfully captures this moment in a quick sketch with white highlights and earth-tones blurring the foreground and the background. He avoids idealisation, as portrayed in Velázquez’s Drunkards (1628-1629, Museo del Prado, Madrid), representing the issues of alcoholism in an increasingly industrialised Spain.

The National Gallery, London, has recently acquired Still Life with Lemons, Lilies, Carnations, Roses and a Lemon Blossom in a Wicker Basket, the first work by Juan de Zurbarán to enter a public collection in the UK. On display at the Gallery since 25 April 2018, the work was painted in about 1643–49 by the son of leading Golden Age artist Francisco de Zurbarán. Long overshadowed by his father, Juan was a skilled still life painter documented in Seville between 1620 and 1649. Works by his hand are extremely rare as his career was cut short at 29 by the plague which halved the city’s population. 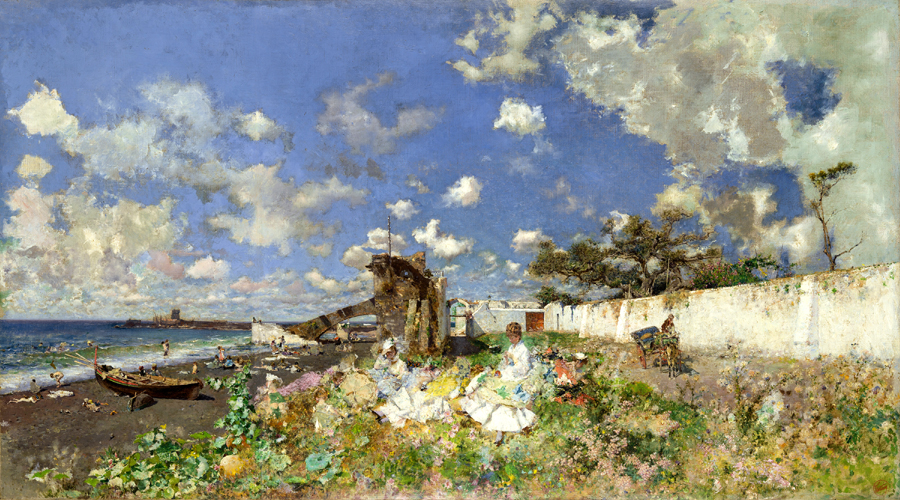