Click here for more information on a three-day residential workshop at the Casa Velázquez in Madrid. Intended for young researchers, the workshop will explore new currents in Hispanic studies. It is organised around a series of lectures by the following scholars:

followed by extensive discussion in Spanish and French.

The deadline for enrolment is 12 July 2018 at 5pm. Applicants are required to fill an application form, which will be evaluated on the basis of academic record and language fluency. The 20 selected candidates will be notified after 20 July 2018. The workshop costs 50 euros inclusive of accommodation and lunch. African and Latin American applicants may be selected for a scholarship of 300 euros, intended as a contribution towards travel costs. 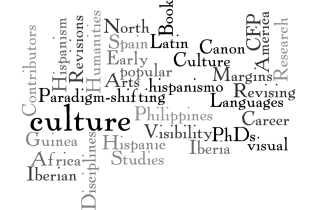 CFP: Revising the Hispanic Canon. Visibility and Cultural Capital at the Margins

In recent years, meta-critical studies such as Ideologies of Hispanism (2005), Spain Beyond Spain (2005), Reading Iberia (2007), Un hispanismo para el siglo XXI (2011) and Iberian Modalities (2013) have sought to uncover the ideological discourses underlying Hispanic Studies and trace its historical evolution in order to elucidate how the discipline might or ought to evolve, if it is to remain relevant in a context in which national, linguistic and disciplinary boundaries have become problematized. The present volume, co-edited by Stuart Davis and Maite Usoz de la Fuente, seeks to contribute to this ongoing debate by considering how the work of PhD students and early career researchers in Hispanic Studies reflects and contributes to the expansion and the blurring of disciplinary limits.
In a broad sense, the duty of every new generation of scholars in any arts and humanities discipline is to encourage a revision of the canon within that discipline and, in the process, to contribute to a redefinition of the discipline itself. This is an exciting enterprise, but it is not without its challenges and pitfalls. Amongst them is the question of how to attain visibility when working on a topic that is little known, or considered a niche area within one’s discipline, or how to position one’s work if undertaking inter- or multidisciplinary research that surpasses disciplinary boundaries. The aim of this book is to offer a useful overview of new research in Hispanic Studies by a selection of emerging scholars, and to reflect upon questions of canonicity, visibility and cultural capital, and the ways in which such notions span and contribute to shape our field of study.
Contributions to this volume are welcome from doctoral students and early career researchers (understood as those who have obtained their doctoral degree within the past seven years) whose work focuses on (but may not be limited to) the following areas:

If you want to contribute to this volume, please send an abstract of no more than 300 words to hispanic.canon@gmail.com by 13 May 2015, accompanied by a short biography including your name, institutional affiliation and areas of research (2-3 lines). Selected contributors will be contacted by 30 May 2015 and the deadline for submission of essays will be 31 December 2015.