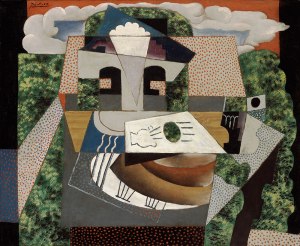 This focused exhibition of paintings is inspired by a work in the Meadows Museum’s collection, Picasso’s Still Life in a Landscape (1915). In the early 20th century, Picasso and the Mexican artist Diego Rivera both lived and worked in Paris. Initially friends, in 1915 they fell out because Diego Rivera accused Picasso of plagiarising the foliage from one of his own paintings.

The source of Rivera’s ire was the perceived semblance between his 1915 Zapatista Landscape (The Guerrilla) and Picasso’s Seated Man (1915-16), which in its first iteration – as seen by Rivera in another visit to Picasso’s studio in August 1915 – was known as Man Seated in Shrubbery. Rivera noted acute similarities between his canvas and that of the early state of Picasso’s work; namely, both works featured a similarly structured still life set outdoors. The Mexican artist’s very specific complaint was his former mentor’s liberal borrowing of Rivera’s formulaic foliage – scumbled patches of green and white paint on a dark ground.

Picasso/Rivera: Still Life and the Precedence of Form takes as its point of departure another case study of the two artists’ works: Picasso’s Still Life in a Landscape (1915) at the Meadows, which will be displayed for the first time with Rivera’s Still Life with Gray Bowl (Lyndon Baines Johnson Presidential Library, Austin), painted in the same year. Exhibited in close proximity, these two paintings together encapsulate the two artists’ overlapping of themes and motif appropriation during that period.

Picasso/Rivera: Still Life and the Precedence of Form affords a closer look at the development of Picasso’s Still Life in a Landscape in the Meadows collection by presenting it together with its analogue from the Columbus Museum of Art as well as Rivera’s variation on the theme from Austin. The visual dialogue taking place in 1915 between these two giants of modern art will be further outlined through the display of Rivera’s 1915 Still Life with Bread Knife, a second generous loan from the Columbus Museum of Art. Beyond the rich anecdotes regarding the relationship of the two artists, this group of paintings provides an opportunity to find parallels as well as deviations between these canvases. In spite of limited wartime resources, 1914-15 proved to be a fecund era of creativity for both Picasso and Rivera.

The Embassies of Latin American countries, Spain and Portugal, in collaboration with Itaú Unibanco and supported by People’s Palace Projects (Queen Mary University of London), are delighted to launch the 2017 edition of the VIA Arts Prize.
In an unparalleled exchange between the UK and Latin cultures, this dedicated visual arts competition invites all UK-based artists to enter into a creative dialogue with Ibero-American art and artists. Following the pre-selection process conducted by the curatorial committee, up to 30 artworks will then go on display for three weeks at the Embassy of Brazil. A special jury will judge the final selection.
Please find full information at the contest website. Submissions for the competition, which may include paintings, drawings, sculpture, photography and prints, are now invited from artists living and working in the UK. Participants must be aged 16 or over.
We encourage you to participate in this contest and there are several ways in which you can get involved:
·         Applying if you have an artistic vein;
·         Sharing this opportunity;
·         Attending the finalists’ exhibition in November to vote for your favourite.
The prizes are: 1st Prize £5,000 and a solo exhibition at the Embassy of Brazil; 2nd Prize £2,000.
The exhibition will be at the Embassy of Brazil in London from the 3rd – 23rd November 2017.
For further information please contact:
Andrzej Stuart-Thompson (English)
Ana Elizabeth González (Spanish)
Marcio Junji Sono (Portuguese)
info@viaartsprize.org
Tel. +44 (0)20 7747 4576
OR  +44 (0)20 7747 4567