Many of the objects that are admired today in Spain’s major museums arrived here in the Early Modern period. Collections of art,
artifacts, and objects—everythig from paintings and sculptures to armor, textiles, feathers, books, exotic shells and even animal horns transmitted a variety of meanings, many of which are lost to the average museum visitor today.

Understanding these objects (their origins, how they arrived and how they were seen) introduces students to a deeper appreciation of how Spanish history and identity has been and is created in relationship with the rest of the world, and especially with Spanish-speaking  America and Asia.  The course will explore these issues using ten selected objects that will provide a view of early globalization focusing on questions raised by the objects themselves.  One of the topics to analyze will be the relationship of art to diplomacy, seeking to shed light on the value of paintings of distant places, peoples and animals as “proof” or “document” in the age before photography, or the place of “the others” (non-Europeans) in the history of Spanish and European societies in general, both in the past and in today’s globalized and multicultural world.  Attention will also be paid to questions such as commerce, consumption, religion, and  gender in a world of travelling objects and persons, always with an emphasis on elucidating how these travels created new meanings for objects in new contexts.

This course has a practical, object-based character, with practically all of the sessions taking place in museums, libraries and other collections in Madrid and its surroundings.  Presentations and discussions will take place in fromt of the objects themselves.  This experience will help students to work with objects and to be aware of the material aspects of globalization, further from what is expressed in academic texts and articles. It is expected too that all will feel  something of the fascination and intrigue experienced by contemporaries who saw these things for the first time.

For further details and inscriptions:
http://formacioncontinua.uam.es/33421/detail/golden-age-art-and-globalization-in-madrids-museums.html 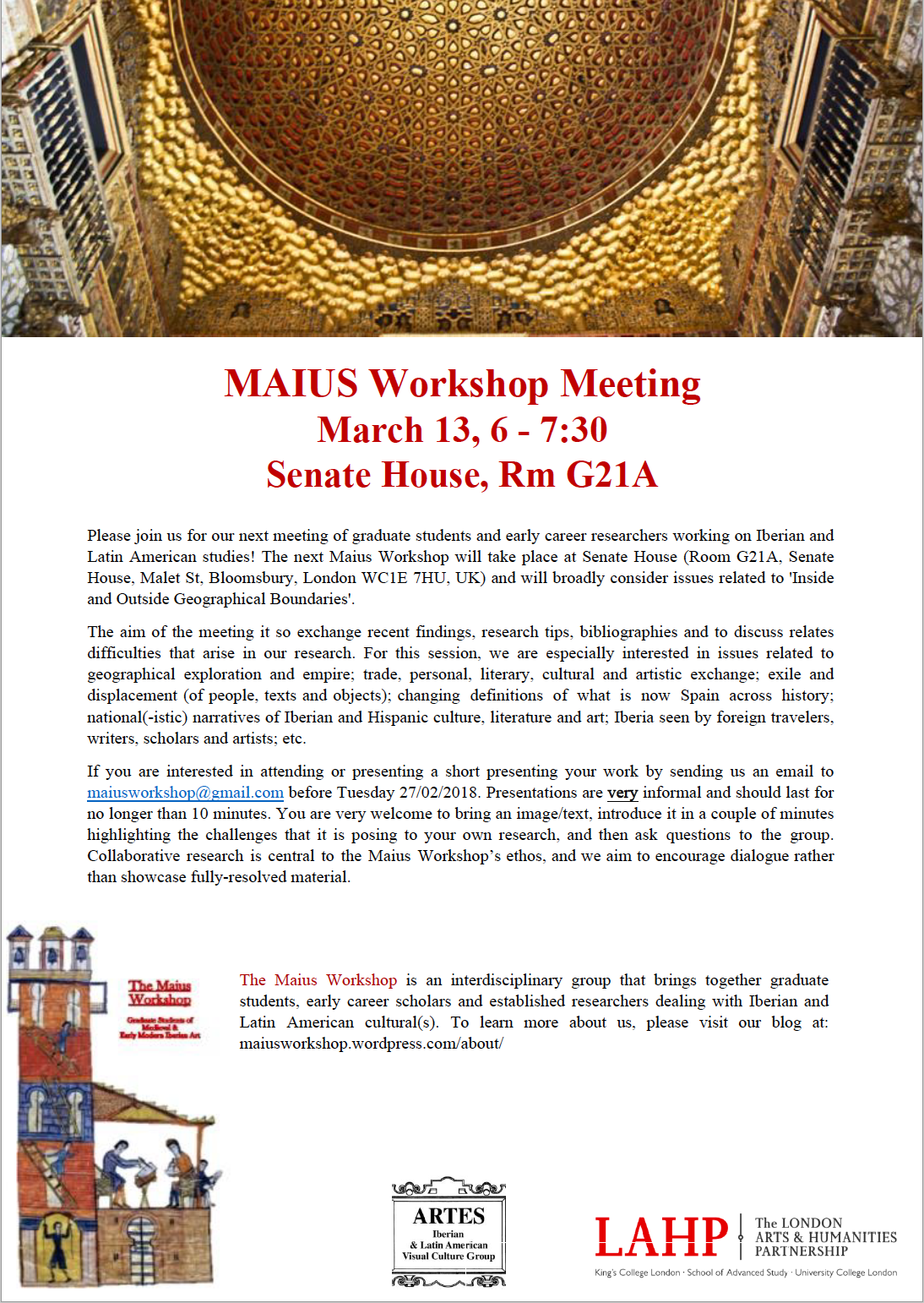 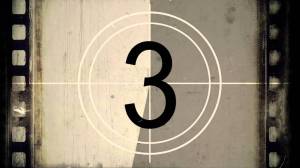 Over the past twenty years, digital technology has become the standard in the film production, circulation, and consumption processes. Within this context, Hispanic cinemas have undergone deep changes, both within the countries with an established cinematic tradition, as well as in those that, due to several reasons, had not developed a robust cinematography throughout the 20th century. The analogue paradigm became deeply contested and a new digital framework, which was widely discussed by institutions, film critics, and academics, emerged. This moment coincides with the widespread generalization of national and transnational neoliberal policies that, far from backing diversity, have increased the gap between those “connected” and those “disconnected” (to draw upon Néstor García Canclini’s term); a gap also experienced by those that, even if connected, still occupy subaltern positions.
The speeding of these processes has resulted in an increase of mobility, at work both in the geographical displacement of film professionals and in the emergence of new narrative models that deal with questions of belonging and uprooting, springing precisely from these experiences of displacement. The cinemas of the Global South, and, most specifically, Hispanic cinemas, have actively taken part in these processes, ultimately playing a relevant role in terms of narrative and aesthetic models, and the production, circulation and consumption of film.
Following the main research axes of the R+D project “Transnational relations in Hispanic digital cinemas: the axes of Spain, Mexico, and Argentina” (CSO2014-52750-P), the International Conference Digital Imaginaries of the South: Stories of Belonging and Uprooting in Hispanic Cinemas conference will discuss these themes:
Find out more on the conference websiteconference website.

For the next annual conference of the College Art Association (CAA), scheduled for 21-24 February 2018 in Los Angeles, the American Society for Hispanic Art Historical Studies is organizing a panel in memory of the Hispanist Gridley McKim-Smith (1943-2013).  The chairs, Mey-Yen Moriuchi and Mark Castro, invite paper proposals by August 14.

Fashion, Costume, and Consumer Culture in Iberia and Latin America: A Session in Honor of Gridley McKim-Smith
“Material splendor—rare and exquisite fabrics, dazzling displays of wealth and sartorial beauty—is a compelling value in Hispanic-American clothing” (McKim-Smith, Lexikon of the Hispanic Baroque 2013, 111).  Gridley McKim-Smith (1943–2013) argued that the “profound materiality and sensuality of costume is crucial in Spain’s American possessions, where only stuffs recognized as prestigious can insulate the wearer from public disgrace and where the most sumptuous silks or alpacas, sometimes interwoven with precious metals, can make the wearer both admired and desired.” (114)  In honor of the late McKim-Smith’s research interests and scholarship this session will consider representations of dress and fashion in Iberia and Latin America.  In the Spanish- and Portuguese-speaking worlds, depictions of costumes in paintings, sculptures, prints, and other visual media, as well as the creation of textiles and garments, demonstrate the power of dress in the construction of social, racial, gender, and cultural identities.  The existence of extensive global trade networks facilitated the exchange and synthesis of artistic practices and craftsmanship permitting unique garments and objects which revealed the wearer’s style, aesthetic preferences, and social status.  We seek papers from broad geographical and chronological periods, from Pre-Columbian to Modern, that consider the role of fashion, costume, and consumer culture in the Spanish- and Portuguese-speaking worlds.  How do clothes mediate identity, ideology, social rank, and subjectivity?  What is the relationship between consumer culture and conspicuous consumption in Iberia and Latin America?  How did dimensions of lived experience—psychological, performative, and political—survive in articles of dress?
Chairs: Mey-Yen Moriuchi, La Salle University, moriuchi@lasalle.edu; Mark Castro, Philadelphia Museum of Art, mcastro@philamuseum.org
The deadline for submissions is Monday, August 14. Click here for CAA’s proposal guidelines, which indicate that speakers on the panel must be members of CAA.  Decisions on the proposals will be sent by Monday, August 28.  If you have questions, please reach out to the chairs. 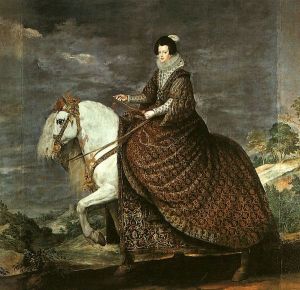 Following the opening conference devoted to this theme, held at CHAM, in November 2016, this second conference brings together an international group of researchers from a range of scholarly perspectives to explore, discuss and debate a series of case studies on the visual construction and projection of women’s political identity in medieval and early modern Spain and Portugal. The papers explore a number of critical perspectives that range from the portrayal of Queens and their household to the discourse on female piety and spirituality, both in the court and beyond to lower social strata. The role of women’s agency within the structures of patriarchal society and discourse that underscored much of visual culture is addressed in a number of insightful ways. Furthermore, the range of papers engages with prescient methodological issues facing the study of the visual dimensions of female political identity.

In addition this conference is pleased to announce a plenary lecture by Juliet Perkins, King’s College London.

Jean Andrews, University of Nottingham
Josefa in Óbidos: painting under the sign of Luisa de Guzmán

Joana Serrado, University of Oxford
Six characters in search of a Canon: Saintliness as Feminist Subjectivity in the Early Modern Portuguese Empire