As part of the 20thanniversary edition of the mass photography display of contemporary and historic works, PHotoESPAÑA (6 June-26 August 2018, venues across Madrid, Barcelona and in Valencia), the Museo Lázaro Galdiano in Madrid will open an exhibition Descubriendo a Luis Masson commemorating the work of the French 19th-century photographer Luis Masson (born 1825), who produced a complete topographical photographic study of Spain and was also noted for his photographic reproductions of the works of Murillo. Masson established himself in Seville in 1858 with his wife, Lorenza Simonin, with whom he worked over the next eight years producing a wide range of architectural photographs, some stereoscopic, of Seville and other Andalucian cities and monuments, working in particular for the Duque de Montpensier. In 1866 he moved to Madrid, recording from there the cities of Toledo, Ávila, Valladolid, Salamanca and Burgos, before returning to Seville at the end of the 1870s, where he was last recorded in 1881.The photographs are selected from the private Colección Fernández Rivero de Fotografía Antigua, which owns about 35,000 original photographs ranging from the 1840s through to the early decades of the 20thcentury. It focuses its collections on Spanish images and in particular photographs created in Andalucia, with a special section on Málaga and its province.  The exhibition was previously shown (January-March 2018) at the Centro Andaluz de la Fotografía, Almería. An accompanying monograph by Juan Antonio Fernández Rivero and María Teresa García Ballesteros, Descubriendo a Luis Masson, fotógrafo en la España del XIX which inventories 511 of Masson’s photographs was published by  Ediciones del Genal, Málaga in 2017.

Now on display at the Museo Nacional de Escultura in Valladolid the museum’s newly acquired group of 19 individual polychrome sculptures by the Seville-born Luisa Roldán (1652-1706), forming the unusual subject of the Cavalcade of the Kings. These small-scale cedar-wood painted and gilded figures were acquired in December 2017 after being export-stopped and are the first examples of La Roldana’s work to enter the Valladolid museum. Amongst the mixed-race cavalcade, which is presumed to have formed the cortege for a much larger, but now dismantled, group, there is a fourth king, the King of Tharsis, the mythical Hispanic region cited in the Bible. The group is believed to have been carved before the sculptress moved to the Madrid court in 1689. A video clip showing some of the figures can be viewed here.

The National Gallery, London, has recently acquired Still Life with Lemons, Lilies, Carnations, Roses and a Lemon Blossom in a Wicker Basket, the first work by Juan de Zurbarán to enter a public collection in the UK. On display at the Gallery since 25 April 2018, the work was painted in about 1643–49 by the son of leading Golden Age artist Francisco de Zurbarán. Long overshadowed by his father, Juan was a skilled still life painter documented in Seville between 1620 and 1649. Works by his hand are extremely rare as his career was cut short at 29 by the plague which halved the city’s population.

Baptised on 1 January 1618, Bartolomé Esteban Murillo (d. 1682) became the leading painter of late seventeenth-century Seville. He completed several religious commissions, especially compelling and innovative representations of the Immaculate Conception. He was also an outstanding portraitist, as revealed in the exhibition Murillo: The Self-Portraits, on view at The Frick Collection in New York until February 4. The painter also excelled in genre pictures of children, a production which made him extremely famous among foreign connoisseurs and collectors, especially in England and France in the eighteenth- and early nineteenth-century.

As noted in a contemporary document, Murillo had ‘all his life been a parishioner of la Magdalena [in Seville] without any notable absence’. His oeuvre and memory are closely connected to this city in the South of Spain, then a flourishing emporium for trade with Latin America.

Unsurprisingly, this year the city will celebrate Murillo’s 400th birthday with a number of large-scale cultural events and exhibition. Information on many of these can be found on a dedicated website, Murillo y Sevilla. Here are some highlights: 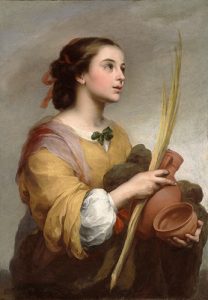 December of 2017 will witness the 400th birthday of Bartolomé Esteban Murillo (1617–1682), one of the outstanding painters of Golden Age Seville. The Meadows Museum, which holds more paintings by the artist than any other collection in the United States, will celebrate his anniversary with a special exhibition. The display will celebrate the Meadows’ extraordinary holdings of artworks by the artist, and pair them with paintings by Murillo’s Sevillian contemporaries, thus highlighting the artistic context with which he remains so intimately associated.

Levi from the Auckland Castle Series

Francisco de Zurbarán was born in Fuente de Cantos, in Western Spain, but spent most of his working life in Seville. Like Ribera, Zurbarán is also considered a Caravaggista (a follower of the Italian painter Michelangelo Merisi da Caravaggio, active 1571-1610) particularly for his exceptional use of chiaroscuro.

These 13 paintings (12 by Zurbarán and one a direct copy of the work by Zurbarán) are a visual narrative of Jacob’s deathbed act of bestowing a blessing on each son, foretelling their destinies and those of their tribes. Although each painting holds its own as an exceptional portrait, seeing the works together provides a unique experience for viewers, transporting them across history to make them a witness to that moment. At the Meadows, the paintings will be displayed together in one gallery.

It is not known who originally commissioned the series, but they were auctioned from the collection of a Jewish merchant named Benjamin Mendez in 1756. Richard Trevor, Bishop of Durham, acquired the paintings for Auckland Castle, seeing in the public presentation of these works an opportunity to make a statement about the need for social, political and religious understanding and tolerance between Christians and Jews in Great Britain.

While in the USA, the paintings will also undergo in-depth technical study for the first time at the Kimbell Art Museum. This will include the use of infrared reflectography, ultra-violet light, x-radiography and pigment analysis. The goals of this work are twofold: first, to gain a better understanding of Zurbarán’s artistic process by exploring this unique series of related works; and second, to identify any additional needs for their ongoing conservation and care after they return to the U.K.

Accompanying the exhibition and conservation research will be an illustrated catalogue containing scholarly essays exploring the series from various historical, religious and artistic perspectives. Dr. Mark A. Roglán, Director, Meadows Museum, is the scientific director of the project and has helped to gather contributions by Claire Barry, Director of Conservation, Kimbell Art Museum; Professor John Barton, Oriel and Laing Professor of the Interpretation of Holy Scripture, Emeritus at Oxford University; Dr. Jonathan Brown, Carroll and Milton Petrie Professor of Fine Arts at New York University; Dr. Christopher Ferguson, Curatorial, Conservation and Exhibitions Director, Auckland Castle; Dr. Susan Grace Galassi, Senior Curator, The Frick Collection; Akemi Herráez Vossbrink, PhD Candidate at the University of Cambridge; Alexandra Letvin, PhD Candidate at Johns Hopkins University; and Dr. Edward Payne, Senior Curator, Spanish Art, Auckland Castle. This exhibition and study have been co- organized by the Meadows Museum, SMU; The Frick Collection; and Auckland Castle; in association with the Kimbell Art Museum. A generous gift from The Meadows Foundation has made this exhibition and study possible, with additional support from the Centro de Estudios Europa Hispánica and the Center for Spain in America.

My Tweets
ARTES
Blog at WordPress.com.