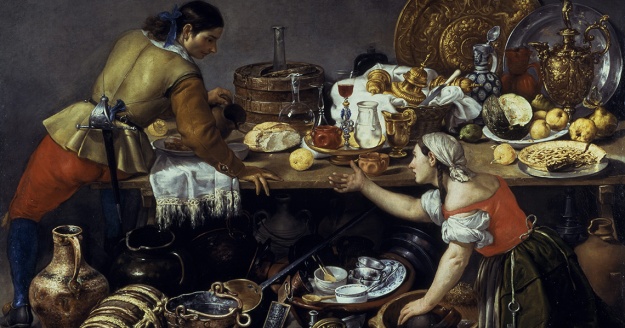 As part of Dulwich Picture Gallery ‘Private made Public’ series of single picture in focused displays, this masterpiece of seventeenth-century Spanish still life has been brought to Dulwich Picture Gallery from the private apartments at Penrhyn Castle (National Trust, Gwynedd, Wales). A contemporary of Velázquez, Pereda is one of the finest still life painters of the Spanish Golden Age and his painting is filled with exquisite details. It was once in the collection of the County Durham-born but Seville-based collector of Spanish art, Frank Hall Standish (1s799-1840), most of whose collection of paintings and many of his drawings, including a large number of works by Murillo, were bequeathed to the French King Louis-Philippe.

Also at Dulwich Picture Gallery in the large exhibition of 80 Watercolours by Singer Sargent 21 June – 8 October 2017 there are several of Spanish gardens at the Generalife in Granada and La Granja outside Segovia as well as a figure composition of Spanish Convalescent Soldiers painted in 1903.