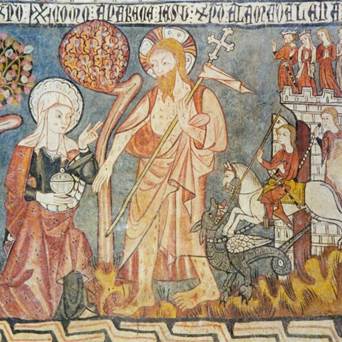 What was the role of images in the religious experience of Castilian people of the 13th and 14th centuries? There is no clear answer, and the scarcity of written evidence has prompted much problematic speculation. However, on the basis of the images themselves and of relevant literary sources, including the well-known Cantigas de Santa María and works by 14th-century authors such as Juan Ruiz and Juan Manuel, it is possible to explore a number of key issues. The talk will be divided into three sections. One focuses on the 13thcentury: ‘Active images: the Cantigas de Santa María and their aftermath’. Another looks to the 14th century: ‘Passive images: the reception and dissemination of the Crucifixus dolorosus in Castile’. And it concludes by looking ‘beyond’ Art History. In the 1960s a Spanish politician coined the (in)famous tourist slog, ‘Spain is different’. His aim was to encourage foreigners to visit Spain, but the slogan is representative of a commonplace that has been repeated time and again since the Romantic era. Ultimately, my talk offers an invitation to reconsider whether Castilian and Spanish devotional practices are really so very different from those recorded elsewhere in medieval western Europe.

Fernando Gutiérrez Baños is Senior Lecturer in the Department of Art History of the University of Valladolid (Spain). He has been Frances A. Yates Short-Term Research Fellow at London’s Warburg Institute (2006) and Visiting Fellow at Princeton’s Index of Christian Art (2013). He specialises in art of the 13th and 14th centuries, focusing mainly on painting and art patronage. He is currently developing a research project on Castilian tabernacle-altarpieces of the Late Middle Ages, funded by the Spanish Ministry of Economy, Industry and Competitiveness and by the European Union through the ERDF (reference HAR2017-82949-P).

This is the second lecture in the Coll & Cortes Medieval Spain Seminar Series 2018-20, focused on images and devotion in late medieval Spain.