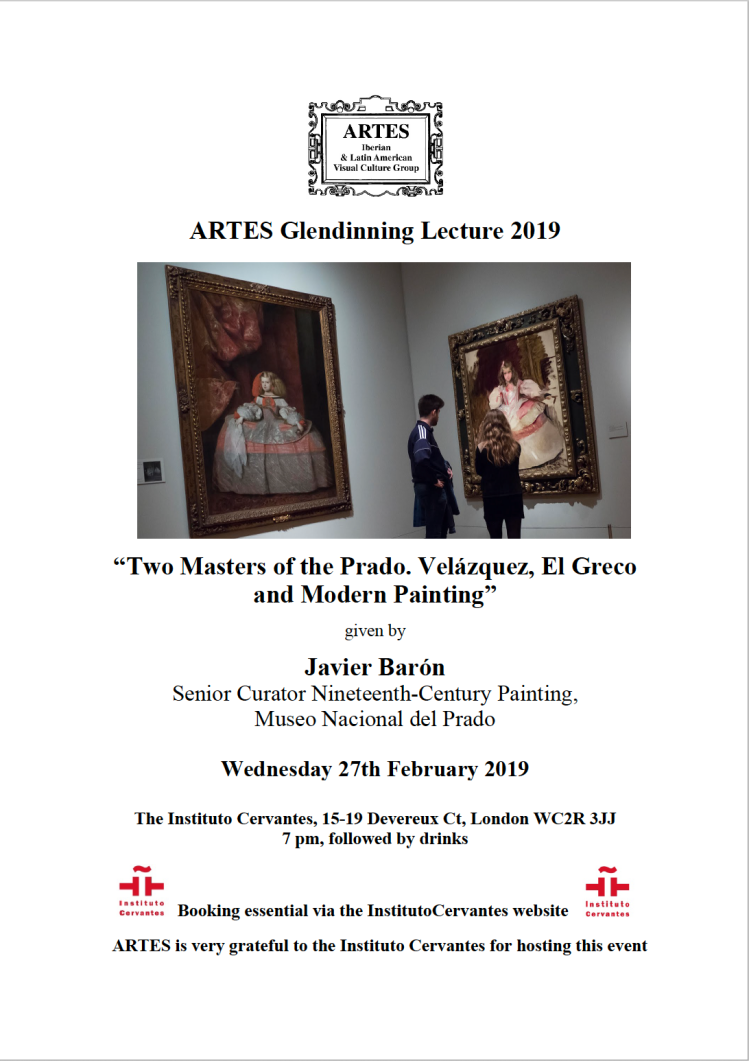 This year’s Glendinning Lecture, an annual event in honour of the great Hispanist Nigel Glendinning, will celebrate the 200th anniversary of the Museo Nacional del Prado.

Dr Javier Barón will deliver a lecture on how Velázquez and El Greco influenced modern painting.

From its opening in 1819, the Prado offered artists a unique opportunity to study the oeuvre of Spanish Old Masters, especially Murillo, Velázquez and El Greco. This was, precisely, the chronological order in which these masters influenced foreign painters.

During the nineteenth century, Velázquez was the most appreciated Spanish master. The Prado owned the most extensive collection of this artist in the world. So, many painters, amongst them Wilkie, Courbet, Manet, Renoir, Sargent, Chase and others came to Madrid to see his masterworks. Velázquez’s approach to everyday life, as well as his large and loose brushstrokes, were relevant to naturalistic painters.

El Greco was especially appreciated after the first monographic exhibition of his work took place at the Prado in 1902. His influence was already important in the mainstream renewal of painting spearheaded by Pablo Picasso and cubism in Paris. At the same time, El Greco was the major reference for Central European Expressionism. American artists also appreciated the suggestiveness of his painting when seeking to lay the foundation of their own modernity.

Javier Barón is Doctor in History of Art by the University of Oviedo, where he was graduated with honours back in 1989. Before joining Prado Museum, he was a professor of Art History at the University of Oviedo (1991–2002). In 2003, Barón was appointed as Head of Nineteenth-century Painting Department at the Prado Museum, a position he held until 2014, when he became Senior Curator. He is correspondent member of the Spanish Royal Academy of History, the Spanish Royal Academy of Fine Arts and the Royal Academy of Fine Arts of San Telmo, in Málaga, as well as member of the Royal Institute of Asturian Studies, Chevalier des Arts et des Lettres, member of the Board of Trustees of the Sorolla Museum and Member of the Madrid City Council Board of Valuation of Works of Art.

Free and open to all, but please book a ticket here.